Home/Marketing Tips, The Business of Marketing/﻿What’s Wrong With the Kendall Jenner Pepsi Ad? A Marketer’s Perspective.
Next

So, what’s the big deal about the Pepsi ad featuring Kendall Jenner? ***You can watch the full add below before they take it down.*** It shows Kendall Jenner leaving a photoshoot, joining an ongoing protest and then giving a Pepsi to a police officer. However, the devil is in the details, and what the ad implies is where the problems arise. The public outcry has been so large that Pepsi has stopped running the ad.

Why People are Calling the Ad “Tone-Deaf” 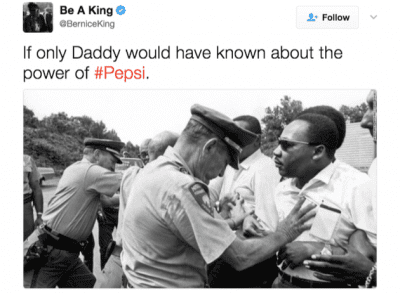 There are a number of complaints about the advertisement, but I will just mention a few of them. The people marching in the ad are supposed to represent the various disenfranchised protesters of the last few years. Perhaps even more specifically, they were meant to represent “Black Lives Matter” protesters, because the ad was actually released on the date of the assassination of Dr. Martin Luther King, Jr.

Bernice King, daughter of Dr. King, tweeted this response to the ad (pictured). “If only Daddy would have known about the power of #Pepsi.” It is awful to insinuate that all we needed for inequality and injustice to be eradicated is for a privileged white girl to start giving out fizzy drinks. It also degrades the multi-decade struggle for civil rights that ultimately claimed the life of Dr. King and others. 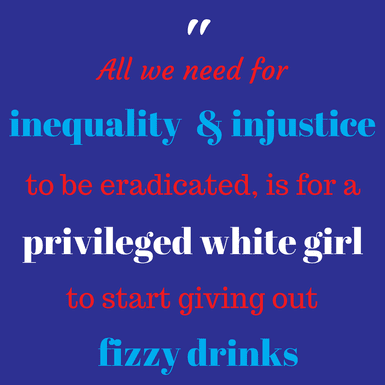 What was Pepsi Trying to say?

After the backlash, Pepsi had this to say by way of an apology: “Pepsi was trying to project a global message of unity, peace, and understanding.” The only part they left out is that they were also trying to sell more soda; everything else was true. However, their honesty and good intentions do not help the fact that the ad truly is tone-deaf. Clearly, it is a grotesque lovechild of stuffy, “out of touch” executives at Pepsi and Creators League Studio ( their agency).

Unfortunately, this whole debacle reminds me of all the corporate fails, where companies fall flat on their faces trying to “highjack” trending hashtags and then get put in their places by trolls on Twitter!

In Seth Godin’s book, All Marketers are Liars, he notes that it is very hard to change people’s perceptions if taken head on. This, in essence, is what the ad was trying to do (among other things). Godin also goes on to say that companies have to be authentic in their message. Each company tells a story with their marketing, company culture, etc.  If all of these aspects don’t align, the general public will notice the discrepancy and the magic of the “story” is broken.
In an interview with CNBC, Mike Jackson of 2050 Marketing, further explains the point. “I think it was the right idea, I think it was the wrong brand,’ he said. ‘Brands need to stay in a space where they’re authentic, where they’re relevant and a place where they’ve been consistent. This is kind of a one-off ad from Pepsi. You haven’t seen that kind of messaging from them previously.”
Pepsi hoped to jump into the national spotlight and be a unifying force. However, the story that they have told in their marketing is inauthentic and rings hollow. Their gamble to grab the national spotlight has backfired. Time will tell how much it has tarnished the brand and cost them in sales.

Clearly, handing someone a Pepsi does not make all the issues of prejudice and inequality magically disappear. Pepsi tried to vault their way into the national conversation and they were successful…but not in the way they hoped. They were called out for being tone-deaf and for suddenly pretending to care about issues of prejudice and inequality. Seth Godin’s words still ring true: an inauthentic story will fail…even if it includes Kendall Jenner.
What do you think could have been done to improve the ad? Let us know in the comments.
By cildermansolutions|2018-04-25T14:53:31+00:00May 8th, 2017|Marketing Tips, The Business of Marketing|0 Comments

This site uses Akismet to reduce spam. Learn how your comment data is processed.